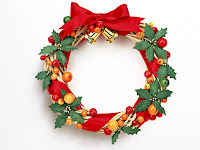 Holy Spirit Anglican Church invites you to join in these Christmas celebrations:


All are welcome (and we really mean that).
The church is at 27123 River Road, the brown church on the left as you go uphill on 272nd.
Lots of parking behind the church.
Posted by fb at 10:51 AM No comments: 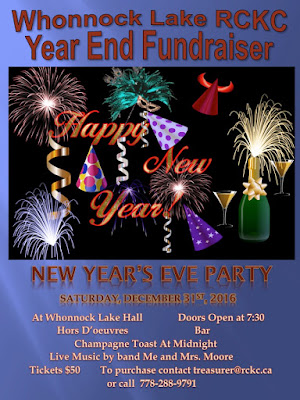 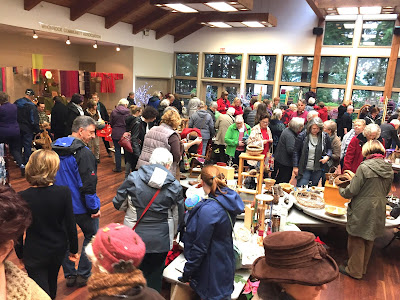 This year’s Whonnock Weavers and Spinners Guild’s annual open house exhibit and sale was as usual a roaring success. It seems that every year there are more people attending, looking at all that beautiful craftwork. One runs into old friends every year and standing in line to pay offers a great opportunity to socialize. Since many years we go here “just to look,” and we never leave  empty-handed. Congratulations to all who tirelessly volunteered and produced. After 36 years the event is still as fresh as it was right in the beginning.
Posted by fb at 8:13 PM No comments: 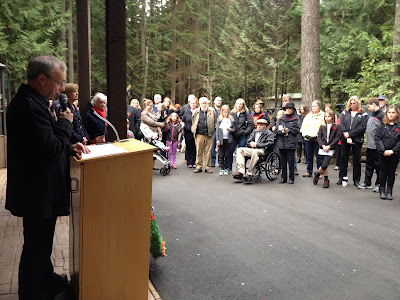 Guided by Tom Brent and Phil Johnson, about a hundred of us gathered at Whonnock Lake Centre and remembered those who gave their lives for our country and others who died in war.
Whonnock Elementary students Allora Martin, Anjali Rutledge and James Launder recited their own poems.
A simple ceremony without politicians and fanfare – much appreciated by all. 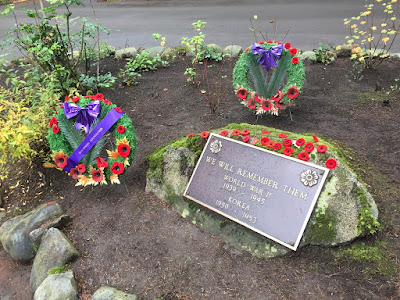 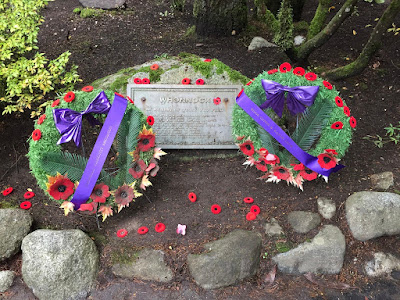 Suggested reading: Mike Lascelle’s article, “A conspiracy of orange” in The News of November 4 (page 20)  about the “strange things happing of late” in your neighbourhood. Click here for for a digital version of the article.
Posted by fb at 11:06 AM No comments: 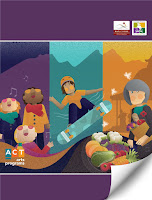 Starting with the fall 2016 issue the guides of what is called now the Maple Ridge Parks, Recreation & Culture will be available for download on this blog.
Under the item Local Links in the right-hand column click on
"Arts & Recreation Guide."

Information about Whonnock and Ruskin leisure programs NOT coordinated by Parks, Recreation &Culture are listed in the right-hand column as well.
Posted by fb at 9:22 PM No comments: 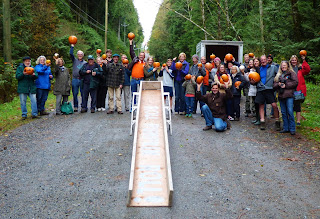 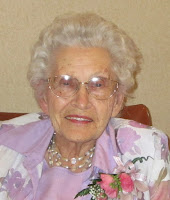 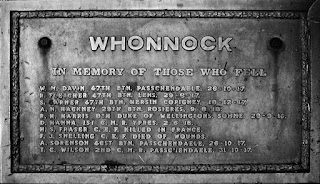 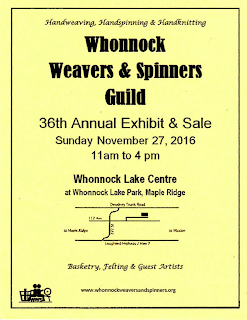 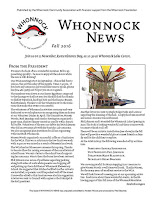 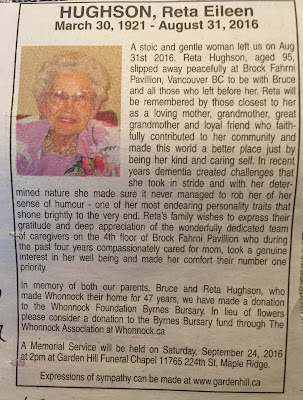 "Brian Malfesi brought home top honours in the national kayaking competitions in Nova Scotia this week.
Malfesi and five other kayakers from the Ridge Canoe Kayak Club travelled to Dartmouth, N.S. for the Canadian championships this past weekend, and according to communications officer and proud father Mike Malfesi, the team had a “good showing.” Click here to read the article in MR&PM Times
Posted by fb at 2:13 PM No comments:

A mother and daughter team -- Val and Amy are starting up yoga and dance classes in Whonnock at the North Fraser Event Centre at 272nd Street and 100th Avenue.
Click here for their Web site were the classes and schedule are listed and where you can read what it is all about: wellness, body positivity, and building connections with the people around us.
Posted by fb at 1:26 PM No comments:

Imagine -- there is no water! 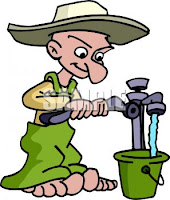 Become part of a formal request that Tantalus Labs’ commercial water licence be either declined or made restrictive in such a way that it will have no negative impact on neighbouring wells.
Their application is putting our communities at a too great of a risk for our water supply.

Thornhill did it again! 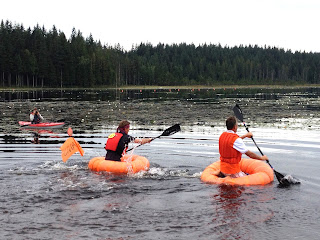 Today the Thornhill people and their friends competed enthusiastically in a relay pumpkin race on Whonnock Lake. The Atlantic team was declared the winner although they used some unconventional techniques. A rich potluck lunch followed the hilarious event.

Visit of Bishop to the Anglican Church in Whonnock

Holy Spirit Anglican Church in Whonnock was filled for the visit of the Right Reverend Melissa Skelton, Bishop of New Westminster on June 19.  Click here for photos.
Bishop Skelton conducted worship, chatted over lunch with parishioners, conducted a Q&A session, and led parish members through a review of goals, resources and needs.
The beautiful and historic church is one of only a handful of country churches among the 58  parishes of the Anglican Diocese which stretches from the Sunshine Coast to Hope.
Bishop Melissa was a corporate executive before being called to the ministry, serving in parishes in the US (most recently in Seattle) before being elected Bishop just over two years ago to oversee the congregations in this Diocese.
In recognition of Aboriginal Sunday, the parish presented her with artwork donated by local artist Bill Parry.  A sign for the Memorial Garden  was dedicated in honour of the late Bud Hjorleifson, long-time member of the parish.  Holy Spirit defines itself by its mission statement, "Open Minds, Inquiring Hearts, Diverse People on a Spiritual Journey".
Our worship services are Sundays at 10 am. and all are welcome.
Posted by fb at 5:03 PM No comments:

The Ruskin Community Hall Association would like to invite all Ruskin Hall friends and neighbours to our annual Potluck Dinner and Silent Auction.

At this time, the Association is looking for auction donations.  We are looking for items that are (near) new, or in good usable condition. Please call Dan Dohogne at 462-0316 to arrange for pick up or drop off no later than Saturday, June 4th.

Each year, a great time is had by all at this event.  It is only through your generous support at events such as these, that our venerable Community Hall continues its existence after more than 90 years.

We hope to see you there, and please, invite your friends and family to join us.
Posted by fb at 5:38 PM No comments:

The Whonnock Community Association held its Annual General Meeting on Thursday, May 19th.  The meeting was chaired by Sandra Rossington (president) supported by Helmi Braches (secretary) left and Noreen Woods (treasurer) right.
Sandra and Helmi will stay on in their present positions this coming year. Noreen resigned having served the WCA for many years. Mary Blackstock will replace her as treasurer. Phil Johnson will continue as vice-president.
Posted by fb at 8:29 PM No comments: 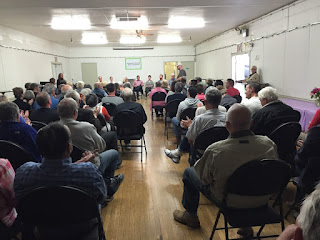 The evening at Thornhill Hall was a great success. It was a full house of enthusiastic citizens. Thanks to Betty and Klaus for organizing and the representatives of our local government for joining us for the event. Click here to see some pictures!
Posted by fb at 1:19 PM No comments: 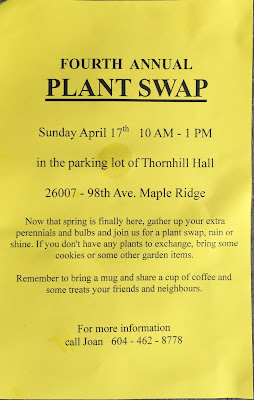 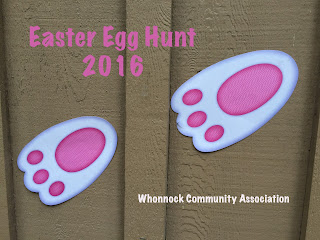 No unhappy faces at this year's Hunt!
Click here to look at the pictures,
Posted by fb at 8:40 PM No comments: 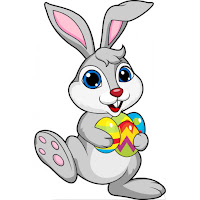 Click here for the latest issue of Whonnock News.
Whonnock News is published twice a year with financial support of the Whonnock Foundation.

YES, the Whonnock Community Association has invited the Easter Bunny to do what he always does: make kids happy! Be at Whonnock Lake Centre on Sunday, March 27th. The hunt starts at 1:00 sharp rain or shine!

Betty and Klaus proudly announce the birth of their new TAPS website that that they were able to launch with the help of RBC Blue Water Grant and the fantastic skills of web designer Pascal Bouchard. Click here to have a look at the site and let them know what you think of it: <tapsmapleridge@gmail.com>