On 1 August 1885 Noble Oliver became the first of a continuous line of a dozen or so Whonnock postmasters. He had come to Whonnock all the way from Ontario, and  in 1884 he opened a general store “adjoining Whonnock station.” In the fall of that year the Post Office Inspector recommended to the Postmaster General in Ottawa that a post office be established in Oliver’s store for the growing community and its surroundings including the settlers across the Fraser River and in the Stave River area. The Post Office Inspector thought that the post office could be “…served with mail from the railway from once to three times a week as may be found most convenient.”

Today Sue Schulze is our postmaster and on Friday 30 July between 10:00 and 2:00 she would like to celebrate this 125th birthday with everyone who loves the Whonnock Post office. Be there!! It will be quite a party.
Posted by fb at 10:40 PM 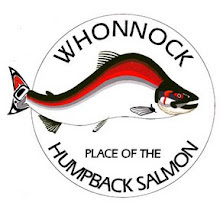